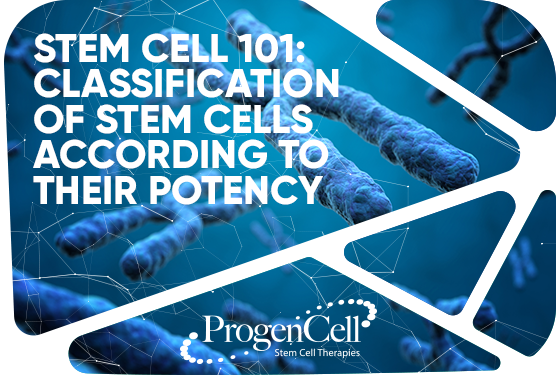 The human body contains many different cells, which carry out specific functions. These are called differentiated cells. In contrast, a stem cell is undifferentiated. It gives rise to multiple cell types including more stem cells. A stem cell is formed when a sperm penetrates an egg. This is a special kind of stem cell, called a zygote and has the potential to grow into a human being. For the first few divisions, all the cells remain undifferentiated. Each cell has the same turnover as the fertilized egg initially, as far as cell type is concerned. As the development phase continues, a series of signals or instructions gradually limit each cell’s potential. Differentiation has begun.

In order to understand how stem cells function, it is essential to know a bit about different groups they belong to. There are four basic classifications of stem cells based on their nature, function, origin and potency.

Totipotent Stem Cells: A totipotent stem cell has the ability to differentiate into any type of cell in an organism. The best example of a TSC is a ‘zygote’ (fertilized egg). It can give rise to embryonic as well as extraembryonic tissues. It has the ability to form any type of cell in a human being and second, it possesses the capability of producing an unlimited number of cells without losing its total potency. The main concern about these cells is that controlling their growth and their differentiation is difficult. They behave as wild cells, so trying to control them for human therapy has been a safety challenge.

Pluripotent Stem Cells: A pluripotent stem cell is also called a ‘true stem cell’.The first batch of pluripotent stem cells is seen in the form of an inner cell mass at the blastocyst stage of fetal development. Pluripotent stem cells have a widespread use in the treatment of various diseases and conditions like heart disease, diabetes, burn victims and even neurological disorders like Parkinson’s disease. This is only possible due to its inherent property of differentiating into almost any cell type like heart, nerve, muscle, etc.

Multipotent Stem Cells: A multipotent stem cell can give rise to more than one cell type, but is more restricted in its function. A good example would be a mesenchymal stem cell which can develop into bone, muscle and cartilage cells. Other examples include adult stem cells and cord blood stem cell

Unipotent Stem Cells: A unipotent stem cell differentiates along a single lineage of cells. For instance, a muscle cell has the ability to self-renew, but only into a specific type of muscle cell. Out of all the stem cells, it has the lowest differentiation potential.

In practice, stem cells are identified by whether they can regenerate tissue and not according to their potency. The most common and scientifically accepted type of stem cells used with therapeutic purposes are adult stem cells (also known as somatic stem cells or tissue stem cells) which can be pluripotent, multipotent, oligopotent and/or unipotent stem cells. Adult Stem cells are found in the body throughout the majority of postnatal life and give rise to a limited number of mature cell types. Therefore Adult Stem Cells are considered Multipotent.

If you’d like to know more about stem cells and/or the benefits of the therapeutic use of stem cells or if you’d like to know if you are a candidate for stem cell therapy contact ProgenCell Stem Cell Therapies directly at +1(888) 443 6235 or email info@progencell.com to start your evaluation and find out if stem cell treatment is viable to help you improve your quality of life and overall health.

Specialized Medical Congress in Regenerative Medicine and Stem Cells May 15, 2021