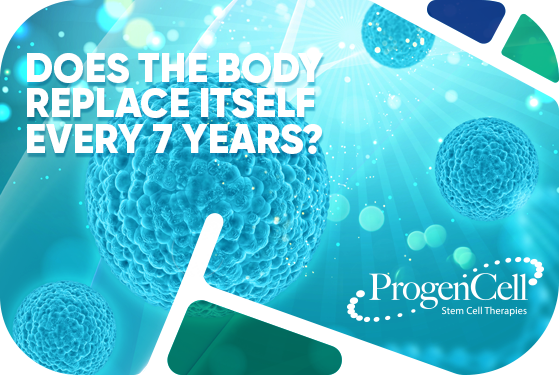 Does the body really replace itself every 7 years? Is it a myth or a reality?

There is a common saying, that is often replicated on social media stating an interesting and fascinating fact: Our cells replace themselves every 7 years. That means that you’re not the same person that you were seven years ago.”

If this fact is accurate, why do I still have a scar on my shoulder from the vaccine? Or why my brother’s tattoos have been there for more than 7 years?

As interesting as it sounds, and eventhough philosophically is true and inspiring, the simple and honest answer is that this seven-year-replacement myth is, unfortunately, inaccurate. But we do know, for a fact, that our cells regrow and replenish. So what is really the life span of a cell in our body? And where does this myth come from?

What is the Life Span of a cell in our Body?

Red blood cells have a lifespan of just 70–120 days, while white blood cells live on average more than a year. Skeletal muscle cells last around 15 years. Skin cells live about two or three weeks. Colon cells die off after about four days. Sperm cells have a life span of only about three days, while some cells never get replaced at all. These include neurons in the cerebral cortex and the cells that make up the lenses in our eyes.

So Where does this myth come from?

Jonas Frisén published a paper in 2005 which showed, based on carbon dating, that the average age of a cell in the human body is between 7 and 10 years. But this doen’s mean that every cell is replaced in 7 years. While the average lifespan of all cells in the human body is about 7 years, this is because some cells being extremely durable, while other cells are renewed every few days to few weeks.

What about Stem Cells in the Bone Marrow how long do they live?

If you need or want to know about the lifespan of cells in the human or are interested in Regenerative Medicine or Stem Cell Therapy, you can always drop a line, join our facebook group Stem Cell Treatment: Patient Talk or give us a call to 1 (888) 443 6235

Ten Recommendations for Patients with Lupus May 02, 2022